Jeevan has always been saying this and we are happy that it is being endorsed: “The chance of baby later benefiting from his or her own banked cord blood is currently less than 0.04 percent, according to the ASBMT. Not only is that because the diseases currently treatable with cord blood are fairly rare, but with many, the child’s cord blood would be unusable because those stem cells contain the same genetic defects, said Shearer, who co-authored the AAP policy statement.” “But should you bank, or donate? Consider the likelihood of using those stem cells. Several medical groups — including the American Medical Association, theAmerican Congress of Obstetricians and Gynecologists, the ASBMT andAmerican Academy of Pediatrics (AAP)—have issued policy statements and opinions related to cord blood banking. The groups recommend public bank donation over private banking because the cord blood has limited personal applications.” “The best case for private banking is if there’s already a family history of one of the diseases currently treatable with cord blood, said Giralt, who is also chief attending physician of the adult bone marrow transplant service at Memorial Sloan Kettering Cancer Center and a professor of medicine at Weill Cornell Medical College.” Read the full article here: Is Cord Blood Banking Worth the Cost? Here’s What the Experts Say

How does Jeevan Stem Cell Bank fare in comparison to global standards? A question asked by Transplant Physicians. Here is the comparison between Netcord, American Association of Blood Banks and Jeevan: 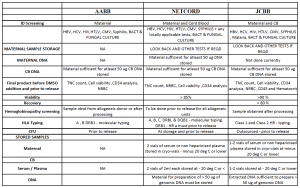 Number of cord blood derived stem cells in each unit is a critical factor. Jeevan is committed to align its processes to international standards to ensue the best outcome of transplants.